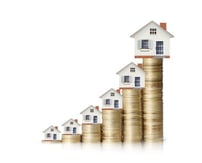 According to a report from Zillow, the total value of every home in the U.S. now stands at $33.6 trillion, or nearly as much as the GDP of the U.S. and China (the world’s two largest economies) combined.

Since 2010, the country’s total market value has grown by $11.3 trillion – a 50% increase. Zillow noted that 14% of that gain came from new stock entering the market, while the remaining 86% represents increased values of existing stock.

North Dakota and Wyoming had the least amount of shares of the country’s housing market, with each accounting for only $66 billion.